China Communications Construction Company Limited (CCCC) has completed the first berth of the container terminal at the new port of Lamu in Kenya.

Following testing, the port will be officially opened by President Uhuru Kenyatta in October, with the first vessel using the port in November. The first phase will comprise three berths, each with a depth alongside of at least 17.5m, and is scheduled for completion by the end of next year. The other two berths were 55% complete in early September. What once seemed to be an unlikely project is now starting to take shape. 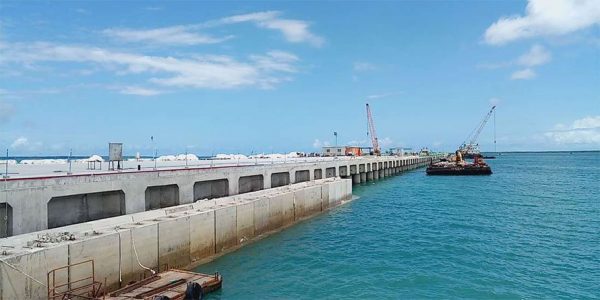 CCCC was awarded the contract in 2015 and began construction at the end of 2016. Its US$449M deal is part of the US$689M total price tag for Phase 1, including the cost of dredging work, building access roads and purchasing tugs. Much of the ancillary infrastructure, including port headquarters, police station and power and water connections have already been completed.

The LAPSSET Corridor Development Authority (LCDA), which is managing the project, hopes to eventually see the development of 32 berths spread over different terminals.

It has been reported in Kenya that the government has financed Phase 1, which will be operated by the Kenya Ports Authority (KPA), but expects private sector developers to build and operate the remaining phases. In a statement, the KPA said: “The port is expected to attract larger cargo ships and if run efficiently will also provide direct benefits within the region by passing on savings derived from lower marine costs due to faster ship turnaround times and at the same time of reducing the cost of doing business.”

The port is designed to serve northern Kenya and neighbouring states to the west and north. An oil pipeline will be built from Kenya’s Turkana oil fields to the port, while road and rail links with Ethiopia and South Sudan are planned.

It seems likely that the viability of the project over the next few years will rest on its ability to attract trade from Ethiopia but traders from that country also have the option of using ports in Djibouti, Somaliland and possibly in the future Eritrea. The KPA expects Lamu to attract cargo that currently passes through the ports of Mombasa, Djibouti and Port Sudan.