The Northern Adriatic port city of Rijeka has been celebrating the 300th anniversary of its status as a free port, granted by Holy Roman Emperor Charles VI on 18 March 1719, and this has prompted a look into the port’s future.

Rijeka port is one of a number of Northern Adriatic ports (Trieste, Venice and Koper to name three) racing to develop capacity and play a role in the increasing trade in the region, driven primarily by the new Silk Road, the Chinese economic strategy to seek better access for Chinese-made products in European markets, which includes acquiring stakes in ports and other transport facilities.

The port is managed by Luka Rijeka d.d., and there are currently seven port infrastructure projects underway worth €133 million ($151.5 million), which, together with the D-403 road, makes total investments of €200 million ($227.8 million). 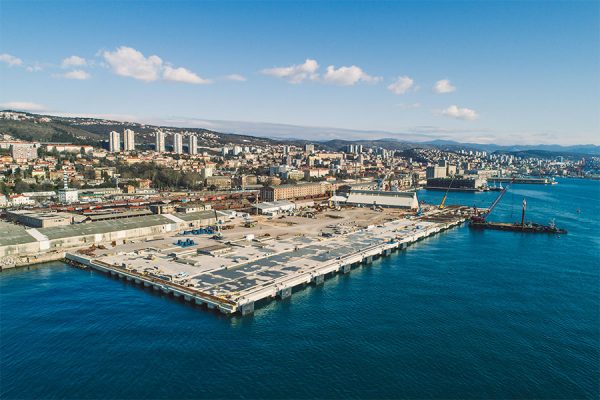 Two of the leading projects are the container terminal development and the rail connection to the port.

On March 4th 2019, The Port of Rijeka Authority has opened a tender for the concession of the new deep-water container terminal.

Rijeka Port Authority head Denis Vukorepa has said that the container terminal at the port’s Zagrebacka Obala section was nearing completion, that possible investors had shown interest and an agreement on a licence to operate the terminal is scheduled to be signed in September this year.

Over the past few years, container traffic at the port has seen significant growth. According to the latest volume projections, by 2025, the number of containers handled in the port will exceed 600,000 TEU, Lučka Uprava Rijeka (PRA – Port of Rijeka Authority) has embarked on the upgrade and construction of new facilities equipped to handle such volumes.

This will allow Rijeka to attract even the latest generation vessels and supplement the container handling capacity of the existing Adriatic Gate Container Terminal (operated by ICTSI).

In February this year, Croatia’s transport minister Oleg Butkovic invited Chinese companies to participate in road construction (D-403) project in Rijeka port. “If Chinese companies have the best offer, they would be selected,” Butkovic said. A tender for the project will be announced soon and that it will be open to all companies, he noted. The experience of Croatia in cooperating with China Road and Bridge Corporation (CRBC) has been good so far, Butkovic added.

The road that Croatia plans to build will link the Rijeka port to the city’s bypass road and is expected to become one of the most important infrastructure projects in the country.

He noted that all current projects would be completed in 2021 by which time the port would become a strong intermodal transport centre in the northern Adriatic.

Responding to a question from the press, Minister of Sea, Transport and Infrastructure Oleg Butkovic said that he expected Chinese partners, too, to be interested in the Zagrebacka Obala terminal and the railway, which is expected to be financed with EU funds as well as a concession-based model.

As the Transaction Advisor for the new Deep Sea Container Terminal in Rijeka, MTBS is the main point of contact for any questions related to this new terminal. On March 4,  the Port of Rijeka Authority launched the Competitive Dialogue for this transaction. Interested parties may address their questions to [email protected].